I'm a cookery teacher, pop-up supper club host and food writer from London with a passion for sharing Persian food. My first book, The Saffron Tales: Recipes From the Persian Kitchen will be published by Bloomsbury in summer 2016 in the UK, USA and Australia. 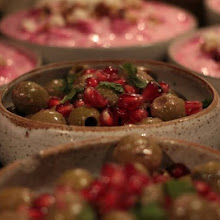 by The Saffron Tales

## **Join Persian cook Yasmin Khan for a culinary tour of one of the Middle
East's most delicious cuisines. **

Deliscious food but not worth the price

I thought this class is slightly overpriced. The instructor was very friendly and knowledgable of the foods that we were making, however, the whole 3 hours were a bit boring to be honest. There wasn't very much to do ourselves, we were more just watching what she was doing in front of us. Another thing that made the experience a bit unpleasant was that the room was freezing cold! There was absolutely no heater on and it felt like we were doing this class in a very rundown place because of this.
On the plus side though, all the food that we made was very tasty. and I'm glad I have the recipes to try out at home.

So sorry you found the room so cold, I wish you had told me on the day as we could have switched the heating on! I've not had that complaint before and it is easy to rectify so thanks for bringing it up. Glad you enjoyed the food and hope you try them out at home.

What a fantastic introductory course. Yasmin is both knowledgable and passionate. She gave great explanations of the origins of the cuisine and the menu we put together was lovely and balanced. A great thing to do on your own or as a couple. It would also make a good present. It's all about the dried mint.

I have thoroughly enjoyed the class. It was both very relaxed and equally informative. Yasmin shares her passion for the cuisine and the culture of Iran effectively. It left a taste for more...! The soup and beetroot salads will definitely become staple foods in my diet and I will attempt all other recipes for special occasions too. Looking forward to the book now. Thank you.

I really loved this class - it was relaxed and friendly, the class was well-structured with demos and participation, and Yasmin had chosen a great range of recipes for us to make and eat. I made one of them at home the next day and it was easy and delicious - and I fully intend to make all the others too!

Excellent combination of taste and textures

A great class to attend if you want to learn a bit about the Persian cuisine. Yasmin gave us a lot of back ground about how to balance a dish with the right amount of sweet and sour and texture which is paramount to Persian food.
Came away having learned some of my favourite dishes.
A brilliant class to do for the experienced, or less experienced cooks.
Looking forward to a next class by Yasmin!

Thanks so much for your feedback. We had so much fun! Hope to see you again sometime. Yasmin x