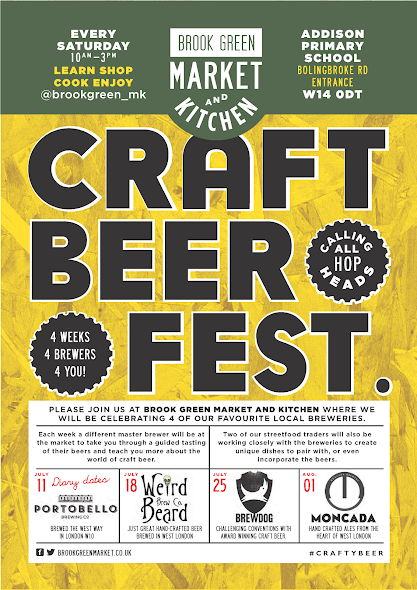 West London will be treated to a taste of the local craft beer scene next month as Brook Green Market and Kitchen brings a series of free weekly guided tastings to the market, as well as food and beer pairings from renowned streetfood traders.

Starting on 11th July and running every Saturday for four weeks Brook Green Market and Kitchen, in West Kensington, will showcase the burgeoning local craft beer scene with a series of Tap Takeovers, guided tastings and food pairings from streetfood traders Social Meat Club and Butcher and Brine, who will each craft unique dishes every week to pair with beers from the visiting brewery.

The tastings are completely free of charge and will be an excellent opportunity to learn all about craft beer from some industry specialists through a series of talks about the art of brewing as well as an opportunity to meet the brewer.

The visiting brewers will bring their expertise, their ingredients (malt, yeast, hops et al), their history and – most importantly – their fantastic beers for sampling.  Championing West London’s local food and drinks scene is something that Brook Green Market and Kitchen is known for: being a hub of food and drinks activity as well as a quality one-stop-shop.

These events, talks and tastings, not to mention the free weekly interactive cookery demonstrations, are just one facet of the market which aims to bring a bit of excitement and innovation to West London.

Guided Beer Tasting will be free with an opportunity to also purchase the beers (costs may vary).

Event will run at Brook Green Market and Kitchen, Bollingbroke Road, W14 0DT throughout market trading hours: Saturday from 10am to 3pm

Have a query about this event? Contact Brook Green Market and Kitchen