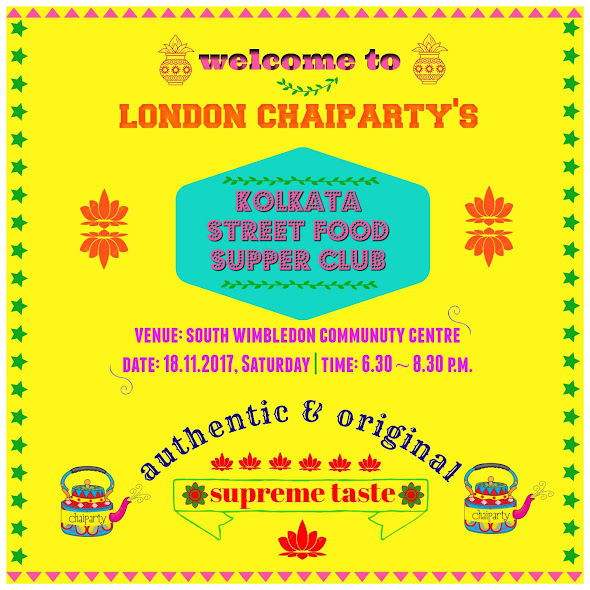 After the success of our Bengali Supper Club, London Chaiparty is excited to announce Kolkata Street Food Supper Club on the  evening of 18th of November (Saturday) from 6.30 to 8.30 p.m.

Kolkata previously known as Calcutta is a sprawling metropolis situated in the east of India. Among other things, Kolkata is famed for it's huge variety of street foods. The bustling streets and bazars of Kolkata is home to thousands of extremely enterprising hawkers who prepare and sell food from their colourful carts, competing with each other to attract more customers. With this supper club we aim to bring to you a slice of Kolkata's famous street foods.

Kolkata's diverse street foods are a testament of her multiethnic population. Both puchka which are little wheat balls stuffed with spiced aloo and dunked in tamarind water and eaten in one go and the puffed rice are sold by the Biharis, while tele bhaja/ fritters are a very Bengali obsession and little shops operate in almost every nook and cranny of the old city, come evening people throng these shops in search of steaming hot pakoras just off the frying pan, which they have with muri/puffed rice. Ghugni /Yellow Peas is a satisfying snack which fills one up nicely while tickling one's taste buds with it's combination of spicy & tart. Momos are a gift of the Tibetans to the city, it is perhaps the latest arrival, but a snack which Kolkatans have made their very own. The story of how the popular Kolkata rolls came about is much disputed, but what is not is that it's from the kitchens of Awadhi khatshamas (cooks) who came in the entourage of Nawab Wajid Ali Shah. The dessert we are serving Kulfi is also an extremely popular street food, we are giving it a Chaiparty twist and integrating the flavours of paan in it. We will have the very popular Thums Up and Masala Chai to wash down the food.

Come join us and let us take on a foodie journey through the streets of Kolkata.

Have a query about this event? Contact London Chaiparty

10/10 : the concept is brilliant ; people are warm , friendly and approachable . The cook was ingenious ; best part of the 8 course meal was the Kethi roll ! Would I come again ... yes either for something different or same again or a party. Ps. Congratulations on the 8 year old boy for distributing the good food !

Thank you Mr Dutta for the lovely review. It was great meeting you on Saturday, wish I had more time to chat with you but the kitchen called :-) Looking forward to feeding you in the future again! Cheers, Suchismita, London Chaiparty Team